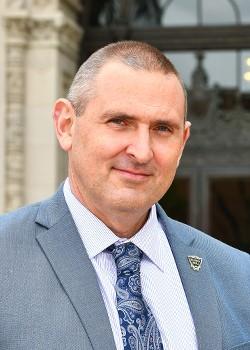 Jeff Muir is Director of Finance for the City of Beverly Hills.  Muir joined the City in 2018 from Culver City where he served as Chief Financial Officer since 2010.

Muir began his career in the City of Inglewood as a budget analyst and worked in a variety of capacities, ultimately holding the position of the Assistant City Administrator and Chief Financial Officer before joining Culver City.

As Director of Finance, Muir is responsible for a total budget of $475 million and a General Fund budget of $236 million.  He serves as fiscal advisor to the City Manager, City Council and City Departments.

Throughout his career, Muir has overseen all aspects of city finance and led a variety of projects such as financial system implementations, ballot tax measures, developing financial forecast models, debt issuance and debt refinancing.

He earned his B.A. in Economics from Occidental College and later an M.B.A. from the University of Southern California.  He also currently serves as the chair for the South Bay Chapter of the California Society of Municipal Finance Officers.